Yesterday was mostly driving from Nelson to Greymouth along the beautiful west coast highway.

First we stopped to do the 1hr Braeburn track to a small waterfall, through a forest with black-mould covered trees and burnt orange leaves falling along the path. 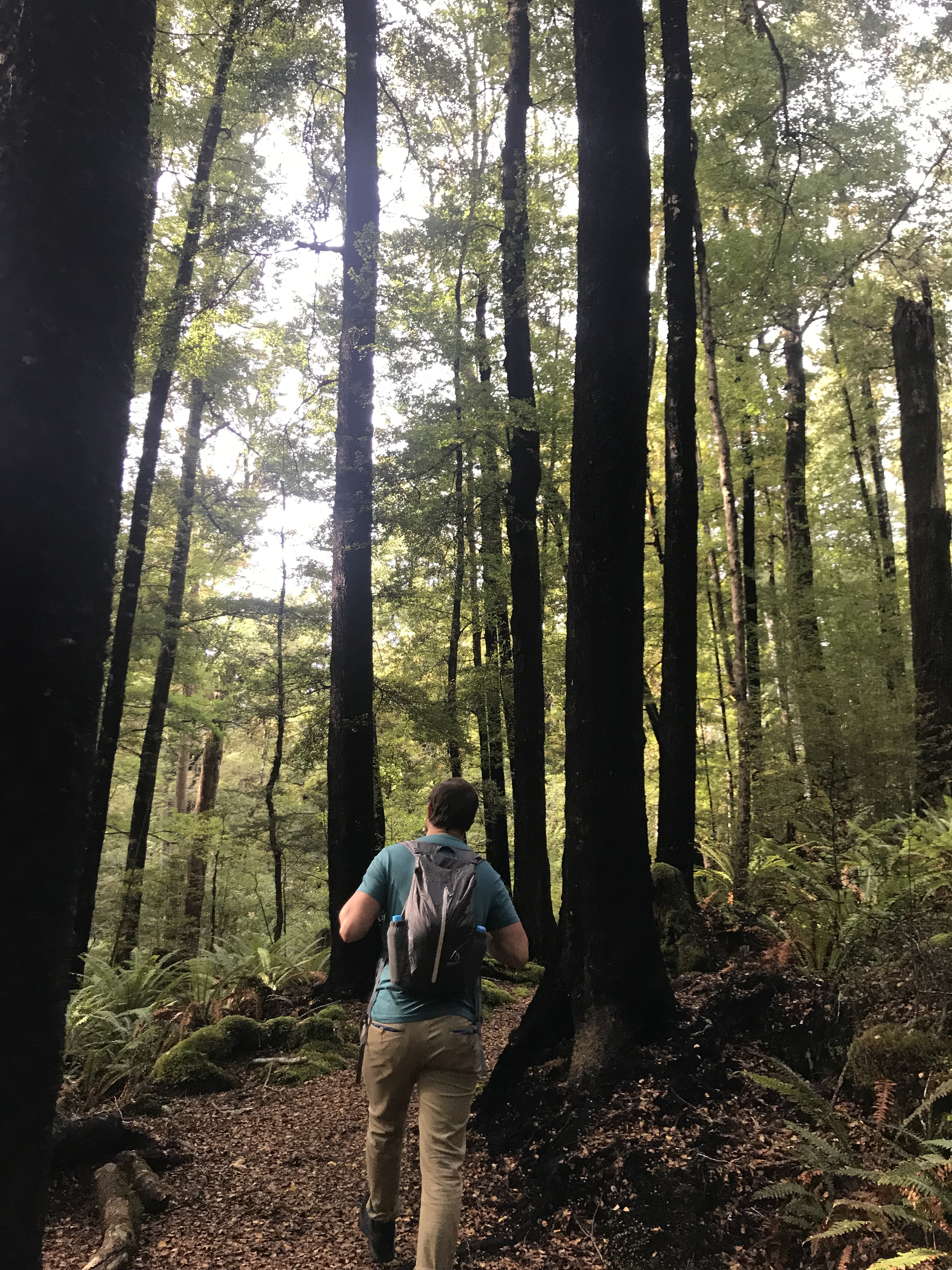 And a quick trip down to Lake Rotoroa (not to be confused with Rotorua, one of my fave spots on the North Island). 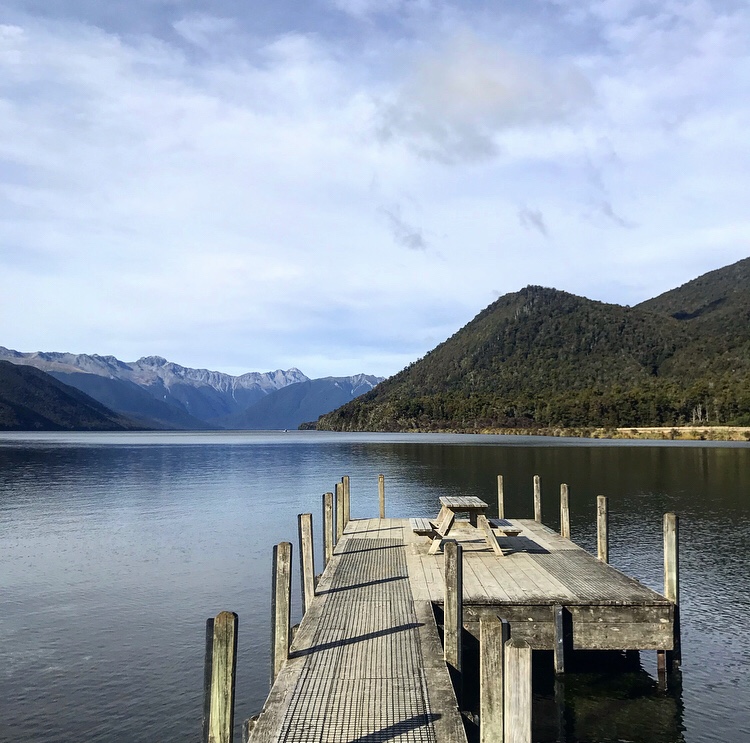 Having not researched the route much we didn’t know what we’d find – but took a last minute turn following a sign to a seal colony! We were not disappointed.

There was kilometres of beach along the coast, but our favourite was by far this little stretch with piles of driftwood that someone had fashioned into some awesome tipis. 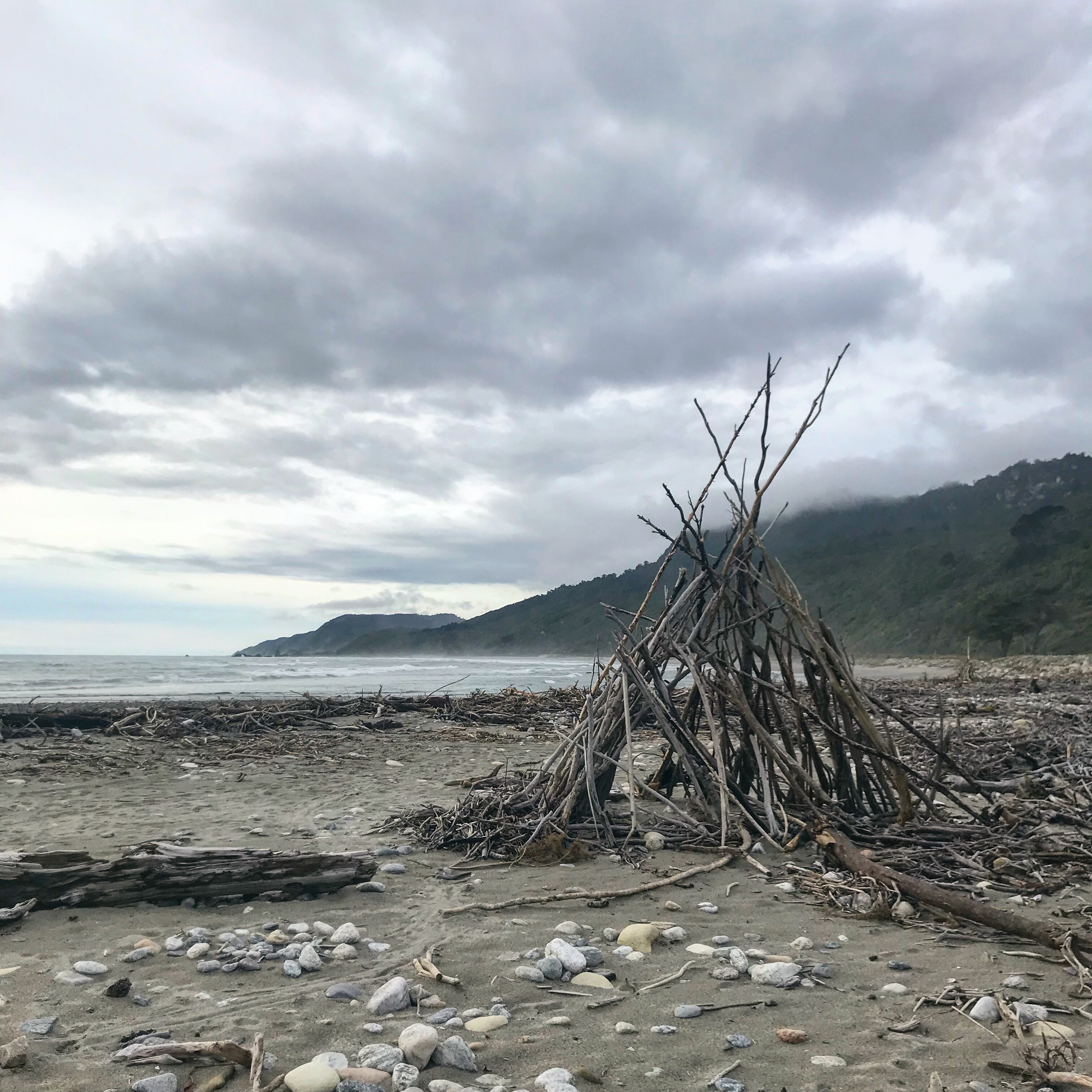 Chesney works in the marketing department for the craft beer and cider team, managing a few different brands under the Heineken umbrella and Montheith’s is one of them. The Montheith’s Brewery may be the only real point of interest in Greymouth but we stayed the night anyway, to eat at the brewery (a free meal!), and go on a tour with the head brewer this morning. I feel like brewers have such a rock n’ roll job for the biology, chemistry, engineering backgrounds they often come from. 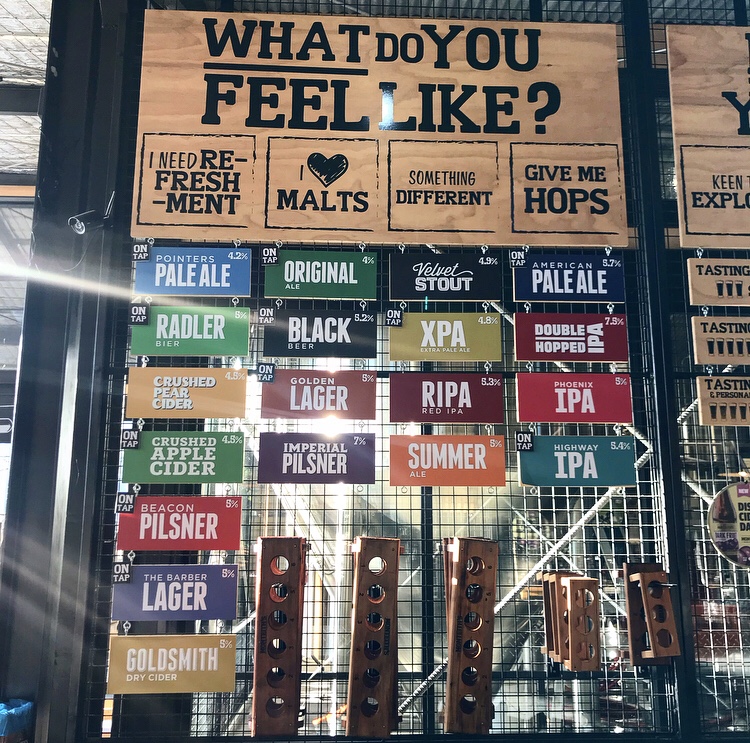 The original plan was to go from here straight to Arthur’s Pass, a town in The Great Divide (the mountain range that runs the length of the South Island). But yesterday we passed a building along the coast with a sign for ‘Underworld Adventures’. The brewery had some ads on a television screen promoting it as well so we finally gave it a Google. It looked rad. It would require backtracking an hour, doing a 4 hour tour, coming back through Greymouth, and then going another 2 hours to make it to Arthur’s Pass, so we were on the fence. We weren’t even sure we could get a reservation but I called. I was surprised when the guy on the other end even picked up at 8pm, and even more so when he said there was space for the 9am tour. We couldn’t make 9am because of the brewery tour, but then he offered to put us on our own tour at 12:30pm. When he said that we couldn’t turn it down, so we decided to rearrange our plans to make this happen. I hope it’s worth it!

We leave straight after the brewery tour and head back up the coast for this ‘underworld’ caving adventure. I’ve never been much of a cave explorer and neither has Chesney but somehow since being together we’ve started doing it all the time. To be fair caves are sick af.

We get outfitted in thick wet suits, hop in a van, and cannot believe our good fortune that it’s actually just us and a guide. We’re driven out to what looks like a toy train station where we board a tin-like train car and our guide drives us through the forest. I’m confused, but into it.

15 minutes later we arrive at a “station”, complete with a little sheltered waiting bench and everything, in the middle of the bush. I ask about why we’ve take a train out here instead of driving (seems like a weird gimmick for a caving company, right?) and our guide explains it’s been built as a representation of transport in the past. This town was the hub for a gold rush in the 1900s and I guess they took small trains everywhere. I don’t know.

Off the tiny train we grab some tubes and set off on a journey over a bridge and up 130 stone steps to the mouth of the cave. A pathway was dug out years ago before anyone knew the kind of damage they were causing to the natural environment. So, defo bad…but also thanks! Without these tunnels we wouldn’t be able to access the cave at all.

Our guide is adorable and SO excited about this cave. She’s been caving for 30+ years and working here for 10. She knows every nook and cranny like the back of her hand and is so excited that we are also excited, that she takes us down an extra chamber of the cave that they don’t usually show tourists. There must be hundreds of different paths and chambers. I have no idea how she knows where we are, I’ve lost my bearings entirely…though I will admit I’m not great with directions at the best of times. Our guide has this waterproof camera and keeps stopping us at specific points where we need to pose for photos which I find adorable, kind of silly, but also useful, because I’ve been on a few adventures now where I haven’t been able to bring my own camera and always wish I had pics.

Most of the tour is about the epic rock/stalactite/stalagmite formations, but the apex of the trip is when we get to the glow worms.

Glow worms can only be found in New Zealand and live deep inside caves, emitting a blue light only visible in complete darkness. They light up like the night sky and are absolutely stunning – a bucket list item. They’re wild af though; they eat each other when times get rough and they’re hungry, and the blue glow emanates from their butts. They’re a weird creature, but they make caving absolutely incredible.

We eventually hop in our tubes that we’ve been carrying for the last hour of two (I’ve lost track of all time and space) and lean back. Above us are billions, probably trillions of glow worms. If you’ve been to the Waipu caves forget about it. If you’ve been to Waitomo, double it. The deep darkness makes depth perception impossible, and I feel like I’m floating through the Milky Way.

Eventually we see some sunlight and reach an exit of the cave. It’s covered in lush green forest and rays of sunlight are beaming through, like something out of a dream. I’m in awe. Is this the most beautiful place I’ve ever been? It may be.

We carry our tubes out into the sunlight and lazily float down the river (with the exception of a few rapids) and back to the ‘train station’ where this adventure started. 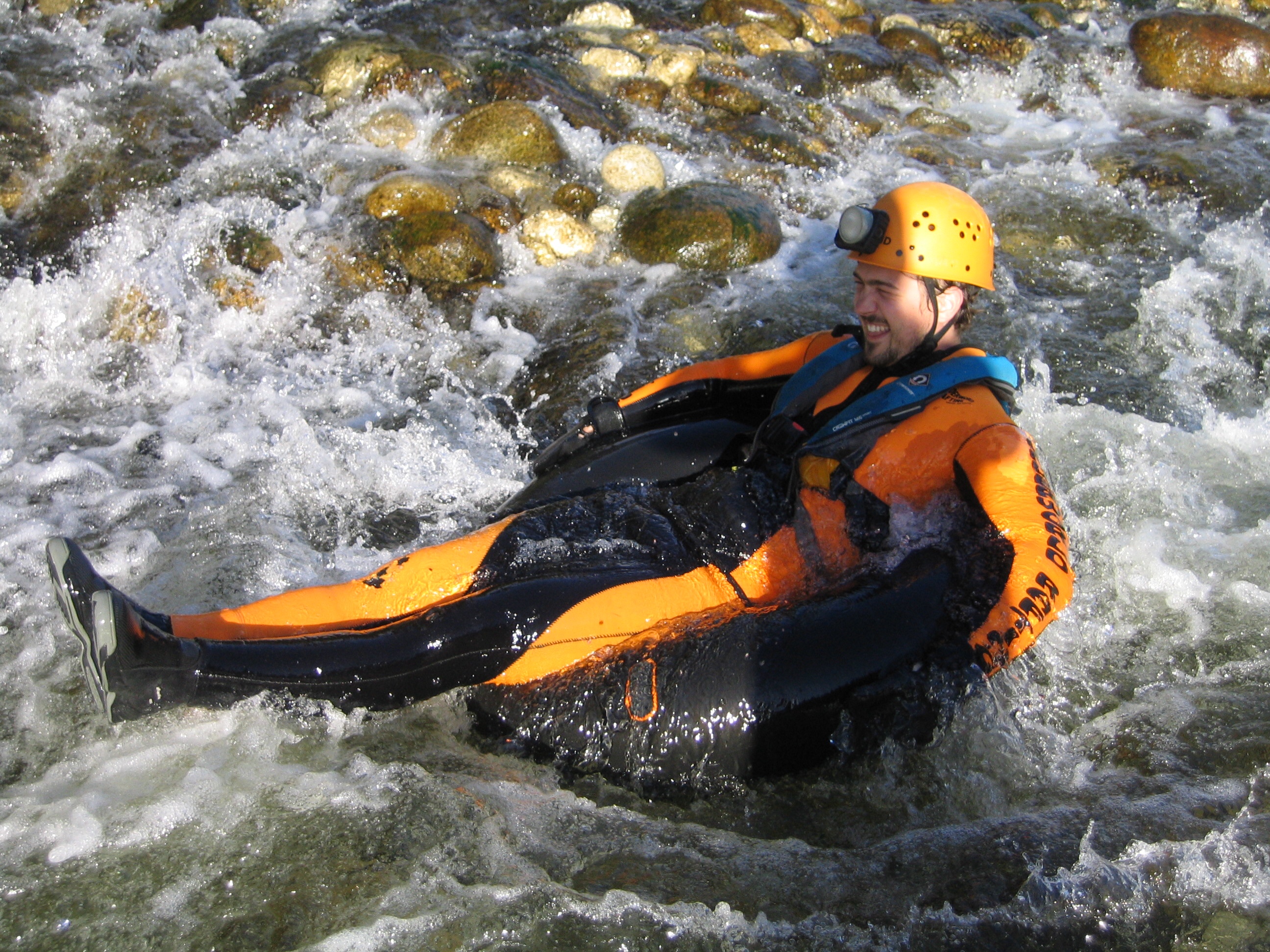 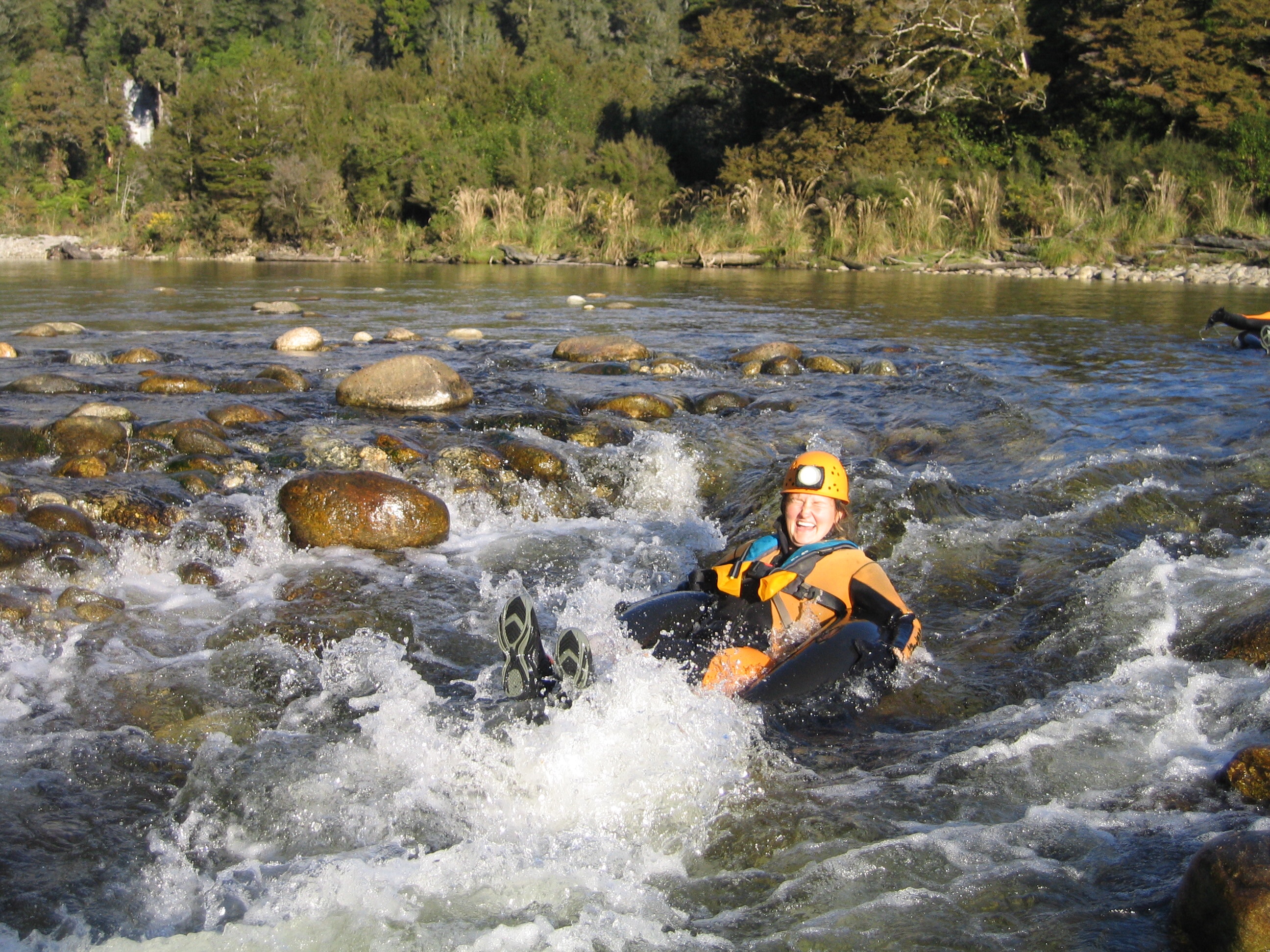 Im so happy it was just the 2 of us and our awesome guide, but I don’t think this tour gets enough hype??? Everyone knows about the Waitomo Caves, everyone raves about the West Coast drive, but I didn’t hear a word about this hidden underground paradise. I cannot recommend it enough.

We peel off our wet suits, take a hot shower, say 100 thank yous, and get on our way to Arthur’s Pass. We’re staying in a slightly nicer accom than the usual cheap Air BnB or hostel we opt for. This time we’re staying in a real live hotel!

The winding roads through the mountains are a bit of a pain to maneuver in the dark but there’s almost no one around which is nice. The only downside to making this drive after dark is that we can’t even see the beautiful mountains around us, but I’m expecting a nice view to wake up to tomorrow. We get to our hotel just before 9pm. It’s a ghost town. The bar/restaurant where we’re supposed to check in is closed. Surely there must be a key for us somewhere?

A woman in a house coat wanders past the bar and seems surprised to see us. She’s left the key in an envelope taped to the door downstairs, which I guess we missed on our way in. We grab our stuff, relieved that we’ll have somewhere to sleep, and head to our room. It’s a small empty space with nothing but a double bed and single bunk on top of it, no side table, no lamp, nothing. Just a small space heater on the floor, plugged in to the only outlet, which to be fair I’m thankful for because the window has been left open and it’s freezing in here. We both smack our heads on the low hanging bunk more than once. Not exactly the luxury room we were expecting – this was the one night we chose to splurge! We also said it was my birthday…because I’ve read recently that if you do this sometimes you get fun stuff, so I’m trying it out. Clearly this was not a success here. It’s not not my birthday…just like 3 weeks late.

Hotel is a strong word. Very strong. At least use ‘lodge’ and be vague about it. If you’re going to the South Island, I do not recommend the Bealey “Hotel”. I do recommend underworld adventures!