I have a random Thursday off work! Yesterday was ANZAC day (Remembrance Day) which is a public holiday so it’s like I’m having a little weekend mid-week. Life in NZ is good.

I meet up with my friend Chesney who also happens to be off work after having foot surgery. He’s just healed enough to be able to walk around again which is convenient af. We get pho for lunch then decide to visit the Art Gallery which I’m actually super stoked on. I’ve been here 4 months now and I still haven’t been!!

It seems like a fun idea until I get inside and see that it’s free for residents…and a whopping 20 bucks for international visitors. Yo. That’s a little steep. I AM technically a local; I have a bank card, a job, a home address…but I don’t carry proof of address on me. Apparently I need something like a library card or kiwi driver’s license, which is easy enough to acquire, but not within the time limit of today. The gallery will have to wait until I can prove I live here. I’m not paying the tourist price.

We’ve lucked out with a warm sunny day, so after a failed attempt at visiting the gallery we decide to go down to the viaduct where we wander through silo park and catch some rays in a public space by the water. I think silo park is a weird part of the city. It’s literally just a bunch of giant old silos by the waterfront, some of them painted up to look fun, sometimes used for projecting outdoor movies in the summer, and probably other cool stuff. But…do any of them actually hold stuff silos are supposed to hold? I don’t know. What even goes in silos? Corn? I have so many questions.
Questions I could easily get answers to…but I think I’ll keep the weird mystery alive.

Chesney works in the wine and beer industry and has arranged for us to do a little tour and tasting at Urbanaut, one of the local craft breweries. We’ve got some time to kill before we head up for the tasting, and somehow find ourselves at the downtown cinema arcade. I haven’t been to an arcade in ages – everything is so advanced now. I don’t even recognize half of the games. I am feeling simultaneously like a dinosaur but also like a child. We spend $15 on a few rounds of skee ball, basketball, and air hockey. It’s not like there’s just regular old air hockey though, there are all these lights and sounds and an electronic score boards showing “home and away”.
I am “away”.
*It should be noted that I win at least 2 rounds of air hockey. I don’t want to talk about the rest.

We catch a bus up to the brewery and meet Ches’ friend who shows us around the small operation and leads us over to the taps. Everything about this place is cool. The bar/lounge area is in the same lofty space as the fermentation tanks, just next to an open garage door leading out into the parking lot where a piece of street art featuring a female astronaut covers the entire wall. A disco ball hangs from the ceiling. We’re given a flight of 8 different beers that include everything from a pilsner to an espresso scotch ale (my favourite).

Each beer has been named after a neighbourhood from a city around the world which naturally, I love.

Nothing about Toronto yet, but the brewery is only coming up on it’s first year anniversary, so there’s time.

I panic when we first start drinking because I realize I’m not a beer expert. I drink a lot and have worked in restaurants where I learned a thing or two, but beer culture is such a boys club at the best of times, and I’m worried I’ll say something lame or wrong, embarrassing all female beer drinkers around the world.
I’m sipping and silent for what feels like forever, until I realize, hey, I totally do know shit. We good. at which point I become a more active participant in the conversation and have way more fun.
I actually love beer. 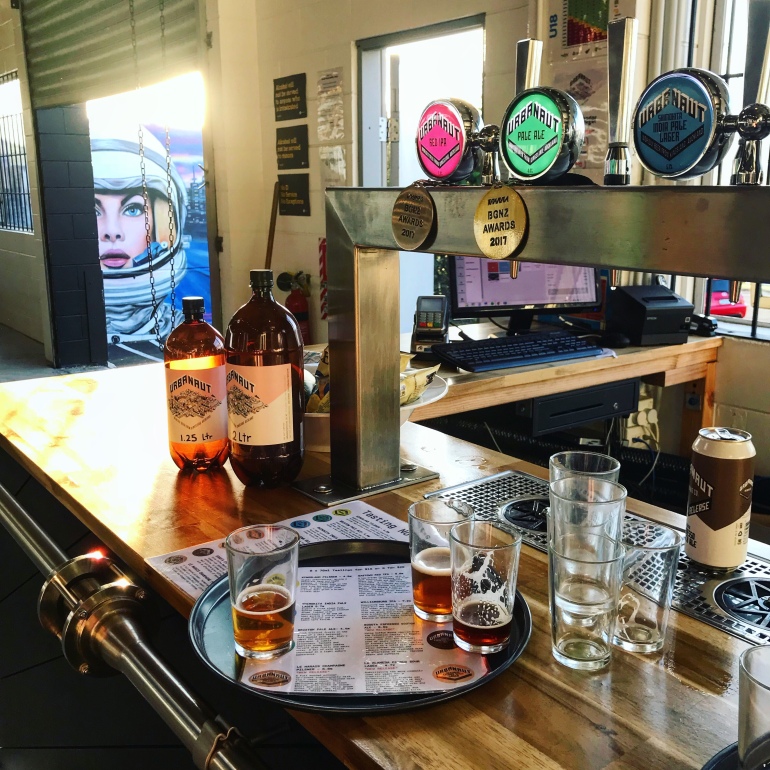 By the time we leave, ya girl is feelin’ a little tipsy. I blame it on the 7.2% IPA. We find a Domino’s and indulge in a $5 pizza. I can’t recall what Domino’s is like in Canada but here it’s a thing. FIVE bucks for a whole pizza?! That means I just spent $2.50 on my dinner. Life doesn’t get better.

Earlier in the day I’d gotten a text from my friend James who invited us to a gig that just happens to be down the road from the brewery. Meant to be! Auckland is insanely spread out so the fact that these things are within walking distance blows my mind.

We meet James outside of a church, where we pay a $10 entrance fee and step into the most hipster venue I’ve ever seen in my life. Microphones, amps, and a small drum set sit across from an arrangement of old mismatched couches for the audience. We take a seat and James produces a small bottle of brandy from his jacket pocket. Something about drinking in a church brings me joy.

A woman with an incredible voice performs some acoustic songs before the main gig, Echo Children, begins. I ask James how he knows these guys and it turns out the singer is his hair dresser. Random af, but sweet. The music is really good, and what I suppose you would call indie folk? I’m not good with genres. Most importantly, it’s paired with a static-y projection of black and white film clips on loop, between the tall stained glass church windows. I’m definitely not cool enough to be here. There are people with handlebar moustaches or edgy choppy haircuts. So many flannels. All the cool glasses. So chic.

After the show we visit Galbraith’s pub next door and have a pint from the hand pull taps. Going back to work tomorrow is going to be way less fun, but at least it’s almost the weekend!