After arriving in Rotorua in the late afternoon, I didn’t have much time to do any exploring yesterday. I settled into my hostel, The Spa Lodge (which is mad cute, by the way) and went to a local pub, Pig and Whistle, for some live music in the evening with my dorm mates.
Ohhhh, my dorm mates.

My 8-bed room is mostly German, with the exception of 2 undeniably American Americans. They are like a walking stereotype. Gator skin boots, camo, a tattoo of Texas, star spangled banner swim trunks, the whole deal. After spending a few hours together, one of them pointed out I was the first person they’ve met on the road who didn’t ask them about Trump. I had absolutely zero interest in having that conversation with them, because I knew exactly how it’d go. Having been raised on political discussions around the dinner table, I have developed strong opinions and a love for debate. However, I don’t see this one going well.

We all spent the night dancing and talking about literally everything else, having a grand ol’ time, but once back at the hostel we slipped up, something sparked a discussion, and a heated argument broke loose. One of the Germans acted as a moderator while the Americans and I hashed it out…until 4am. Oops.

So this morning I’ve gotten up to meet the Germans for a hike through the Redwood Forest, unsure of whether or not the Americans and I are still cool. They’re still asleep so I won’t know until later.

Most travellers I’ve met here in New Zealand have rented or bought a car. All the best spots are often far from the city centre and it’s really the only way to get around. Buses can take you between major locations, but otherwise you have to go with a tour package and I have no interest in doing that. Even though the Redwood Forest is relatively accessible from our hostel, there’s a difference of an hour walk or a 5-minute drive. Luckily, one of these guys has a car.

It’s a rainy morning which has brought out the contrasted colours of rusty red and lush green in the forest. I’m not a botanist or anything, but I never expected Redwood trees to grow in the same area as these giant, Jurassic Park-resembling fern trees. It makes for a super interesting trail. Entrance to the park is free, unless you want to follow the hanging bridges that are hung up in one small area of the forest, which looks pretty damn cool, but it’s also $25, so no thank you. We follow the arrows for a 3 hour route, which ends up taking us a little longer because we get lost more than once. I swear someone has stolen some of the arrows off the posts just to confuse us. Rude. 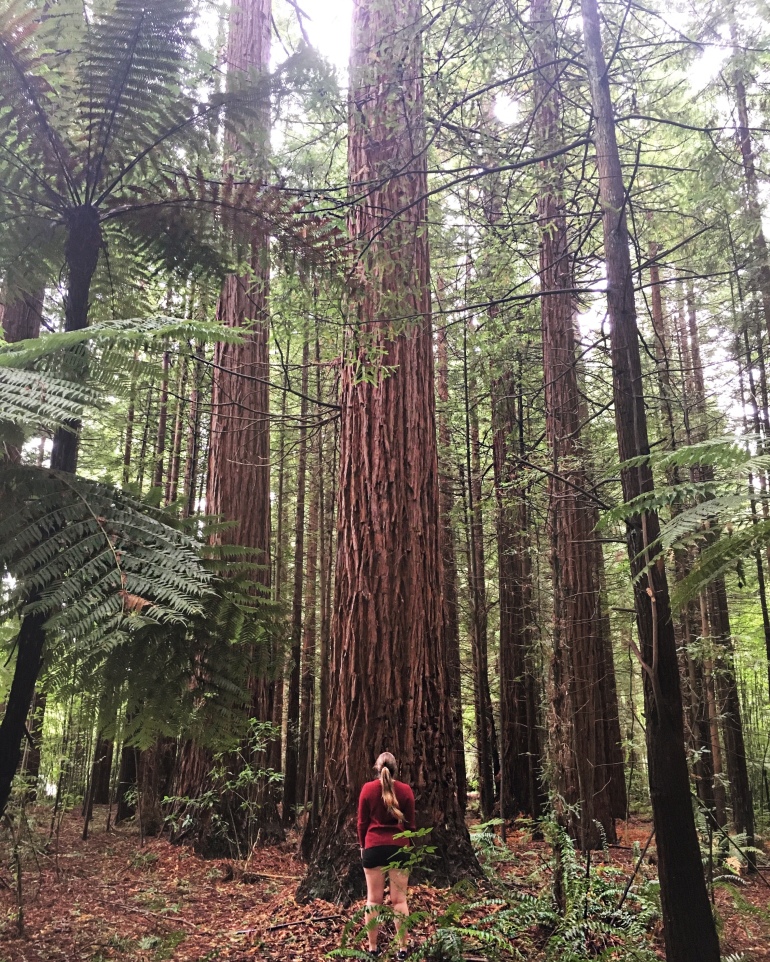 The 3 people I’m hiking with are all lovely. One thing I’ve noticed about German people when traveling is that they are really considerate of the language barrier and will speak to each other in English even when I’m not necessarily involved in the conversation, just to be polite. Usually other people revert back to their native languages which doesn’t bother me in the slightest, but I still think it’s really nice of them to keep me in the loop.

By the end of the hike my legs are pretty tired and I’m dreading how I’ll feel tomorrow. I’m a city walker; flat surfaces only. I can’t handle this incline business. Fortunately, our $20/night hostel has its own geothermal sulphur spa pool! and it’s free!

We take a dip to relax when we get back to the hostel, and I run into the Texans. We have a quick awkward like, “heyyyy sorry ‘bout the yelling…I stand by everything I said….but we good? Yeah we good. Good.”

We vow not to talk about it again, though.