Bells are sounding off in the distance. It’s still dark outside, but I suppose this is to wake the residents of the monasteries. We hear them first from our neighbouring cliff, and then faintly from somewhere much further away. The sound bounces between the mountains and rocks to reach us in our little fort beneath the trees. The moon has risen and I catch a glimpse of more falling meteors before drifting off to sleep again.

This time, when I wake up, the sun is shining just above the edge of the cliff, and i turn around to see two humans standing 20 feet away from me. It’s a father and his young daughter, just here to watch the sun rise, but it feels invasive and awkward all the same. Do I say good morning? Have they even seen us? I avoid drawing any attention in case I freak them out. They don’t stay long, and once they’re gone I bring my blanket with me out from under the trees, to the top of a rock where I can enjoy the morning sun.

We have some “breakfast” (a slice of bread and a juice box) before packing up and heading over to the nearest Monastery. I’m not really very interested in religious things. Especially of the Christian variety. Buddhism and Islam interests me somewhat, but even then I’m not enthralled. I’m really just here for the views but I know I should check out what it’s all about.

We pay 3€ to enter, and im told I have to wear a skirt, even though I’m already in long baggy black pants. This is one of the things I dislike about all religions. Don’t tell me what to wear! Why do the boys get to walk around in shorts while I’m subjected to another, and very specific, piece of clothing because of my gender? But fine. There’s a pile of various fabrics that can be wrapped and tied into sort of pseudo skirts and I take one. Joseba didn’t understand that the instructions were specific to me, so he grabs one too. Cesc and I repress laughter and let him put it on until the receptionist shouts at him to stop.

The rest of the time we’re respectful though, I swear.

The paintings and old artifacts kept inside are cool, but the most interesting to me, is of course the epic architecture, and this neat little pulley system used to brings goods (and sometimes people) to the top of the tower from 100m below. All our phones are dead so I don’t get any cool photos.

There are 6 monasteries, but 1 is enough for us. I’m really just here for the cool views.

We drive into town to charge our phones and get some real food. I have the best gyro ever at a random little bar for 2€. Bless gyros.

We set off for Mount Olympus but stop along the coast first for a quick beach visit. The plan was to go for a swim but ominous clouds are rolling in, which means no swimming, and probably no camping tonight. 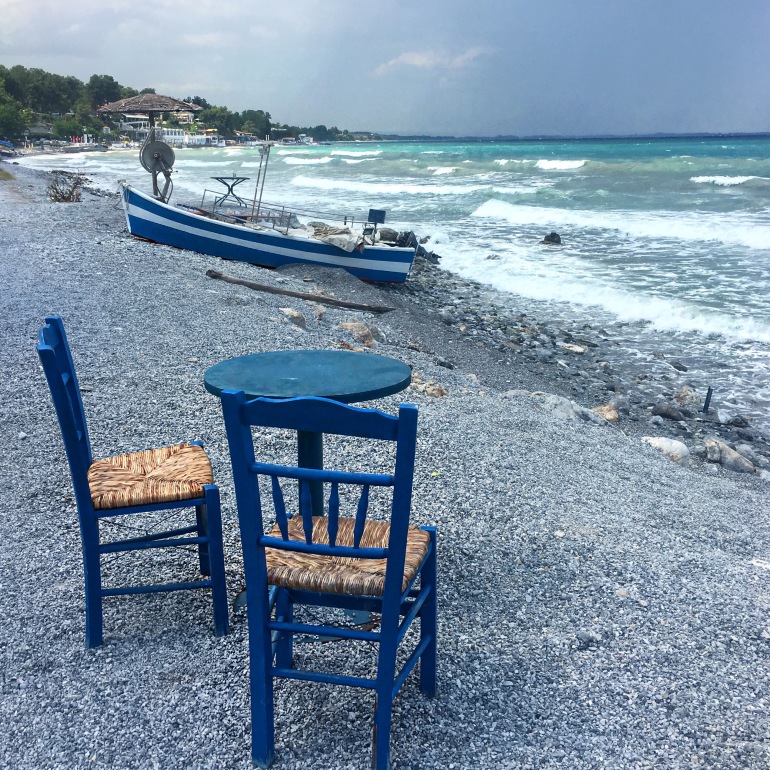 We can see Olympus in the distance, enveloped in dark clouds, looking like an unfriendly place to sleep outdoors. Guess the three of us will be sleeping in our little plastic box-car tonight.

The hike to the summit of Olympus is about 5 hours up and 2 hours down. We were going to do half the ascent today, camp on the mountain, and finish the rest in the morning, but the rain has foiled our plans. What can we do now?

We turn to Google. I find a quick recommendation for the city of Dion (named after the gods for its proximity to Mt. Olympus) which sounds cute and old so we go.

We follow signs through the sleepy little town to a museum, where so few cars are parked I’m not even convinced it’s open. We enter the reception area where a woman sits, chewing gum and barely lifting her gaze to acknowledge us. Crickets.

I enquire as to where the hell we are and how much it costs. She tells me it’s 8€, which seems a little steep considering the pamphlet I’m scanning over describes it as “part swamp, part ancient ruins” and I notice her sneak the word “replicas” in before “ancient artifacts”. We decide to skip it. I feel kinda bad but can’t help but laugh that I’ve just brought the whole squad here for this. Sorry lads!

The rain came and went quickly. We decide to check out Olympus to vibe it out, but save our hike for tomorrow. We find a short trail that leads us to a small Waterfall with a shallow pool. 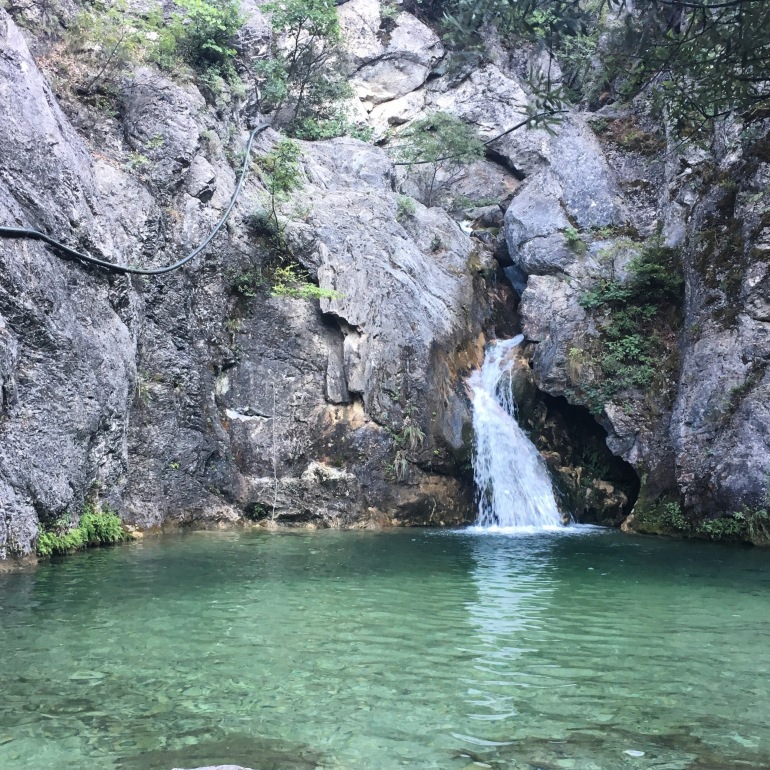 The sun is going down and the water is too cold to swim so we don’t stay. Instead, we move on to the priority of finding somewhere to sleep.

We find a spot near the parking lot of the trail head where there’s an old church and some picnic tables just beyond a fence next to the road. The grass isn’t too wet so we figure we can set up outside instead of all 3 sleeping in the tiny car. We hop the fence and get to it.

I notice the small church has a flickering light inside. I peer through the stained glass window to see one single candle burning inside the locked building.

This is exactly how a horror film would start. A random church in this random place where we’re not supposed to be. Ignoring the sketchy sign of an abandoned lone candle. Creep city. I’m certain this is the end. Blondes always die first. Life’s been good, see ya.

The boys think I’m being crazy until we hear some light rustling in the bushes next to our beds. Then suddenly THEY look even more scared than I am. That’s not allowed! I need someone to tell me we’re going to be fine, not fill their eyes with fear.

I don’t know how I relax enough to sleep, but eventually I do.

The bright side to the chilling darkness out here is that the meteor shower is still happening! So we fall asleep to stars falling across the sky once more.