Waking up for 10:30 feels impossible, which is pathetic because I went to sleep at midnight. Well, I tried, but with my job starting at 4pm or later every day, I’ve been staying up late. Today, 10:30 feels like 6am. I’m apart of a Facebook group specifically for TEFL teachers, and someone posted an ad offering 1€ yoga classes. This is what has brought me up at such an ungodly hour. I need to start doing something fitness wise, because between all the time I spend sitting on the metro, and my inability to cook causing me to eat basically nothing but sandwiches…things aren’t looking good for my health. Not to mention all the Estrellas…

Lindzee and I meet at our half-way point metro station and head down to the address listed on the Facebook page. I was expecting someone’s damn basement or like a park or public space, but somehow it’s in a legit studio. Way too cute for this to be 1€, I don’t understand. Especially when it’s a class of 5 people. He’s not exactly profiting here.

All of the instruction is in Spanish so I spend a lot of time peeking at what other people are doing instead of focusing on my breathing and such, but I think that’s okay. I pick up a couple of Spanish words in the process. 10/10 would (and will) do again. 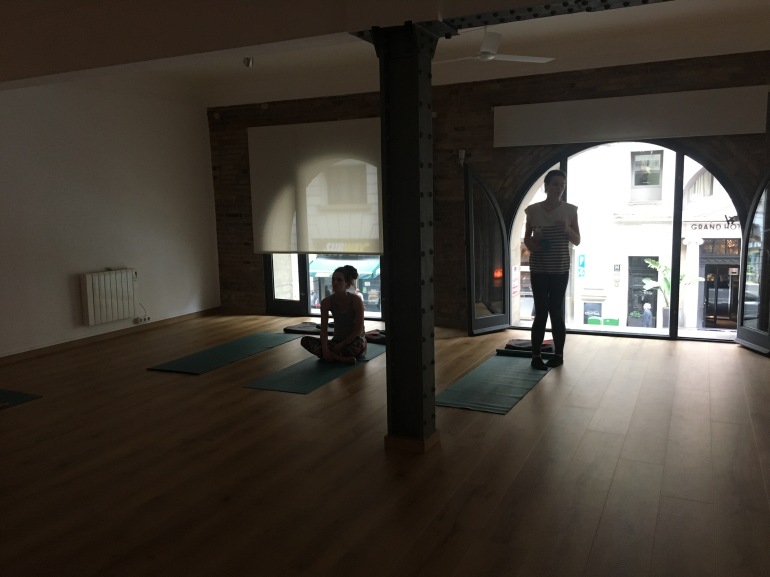 I find myself walking through the shopping area at my home station of Clot. I have -5847373€ to my name, so I can’t really buy anything but I accidentally purchase a cheap necklace and a cat hair lint roller thing. At least the second purchase is practical. I’m really not used to having cat hair on ALL of my shit, and I’m not a fan. Having a cat is fun, but it’s not as glamorous as it seems.

Then onto my Monday lessons. I did some rearranging and instead of having the 3-back-to-back-class-Monday-of-death I’ve had for the past two weeks, I now only have 2 classes. My evening class switched to Thursdays and I’m stoked.

Or so I thought. They text me two hours before their lesson would have started to tell me that they’d like to start their new schedule next week instead, and still want me to come tonight. They’re by far my favourite and most chill class, so I forgive them, but now this means I have to run around all over Barcelona tonight. At least I know it’ll be the last time.

In anticipation of my soon-approaching first pay day, I do the math for all the hours I worked and am relieved to find that I’ll have enough money to cover my rent! Success!!