Worst morning ever. I’m in rough shape. No Bueno. But there’s no time to waste when you’ve only got 2 weeks in a country, so I crawl out of bed. We have breakfast at Playa Roca, and Ilona and I make a very impulsive decision to catch a bus to San Juan Del Sur. Tanner stays, but we will probably meet up with him a week from now when we visit Granada.
It’s a 5 hour journey to San Juan from where we are now in Las Peñitas, and we need to take 3 different busses to get there. We hop on a chicken bus (yellow school bus that crams as many people on as possible, standing room in the aisles if necessary. Some people actually carry chickens, pigs, etc. This is a common form of cheap transportation in Nicaragua. We each pay 14 Cordobas ($0.50) for a 20 minute ride) which takes us back to Leon. Here, we get a taxi to the bus terminal; this costs 25 Cordobas ($0.90) for the two of us.
At the terminal we hop in a van which makes the trip back to Managua; 54 Cordobas ($1.90). We both get crammed into the front seat next to the driver. I spend the entire 2 hour trip with my backpack on my lap because there’s no space anywhere for it in the van. Our driver plays Spanish covers of Abba and helps us take photos of volcanoes in the distance. There are a few close calls…like he almost gets us into a head on collision with an 18 wheeler truck…but he’s cool.

Our bus transfers have all been so back to back that we’ve had no time to buy snacks or even pick up a bottle of water. Luckily, we get stuck in a bit of construction traffic where vendors capitalize on the opportunity by coming up to every car window, offering bags of orange tortilla chips, soda, water, etc. It’s bagged water, which I find so strange, but I’m thirsty as hell so I buy one. 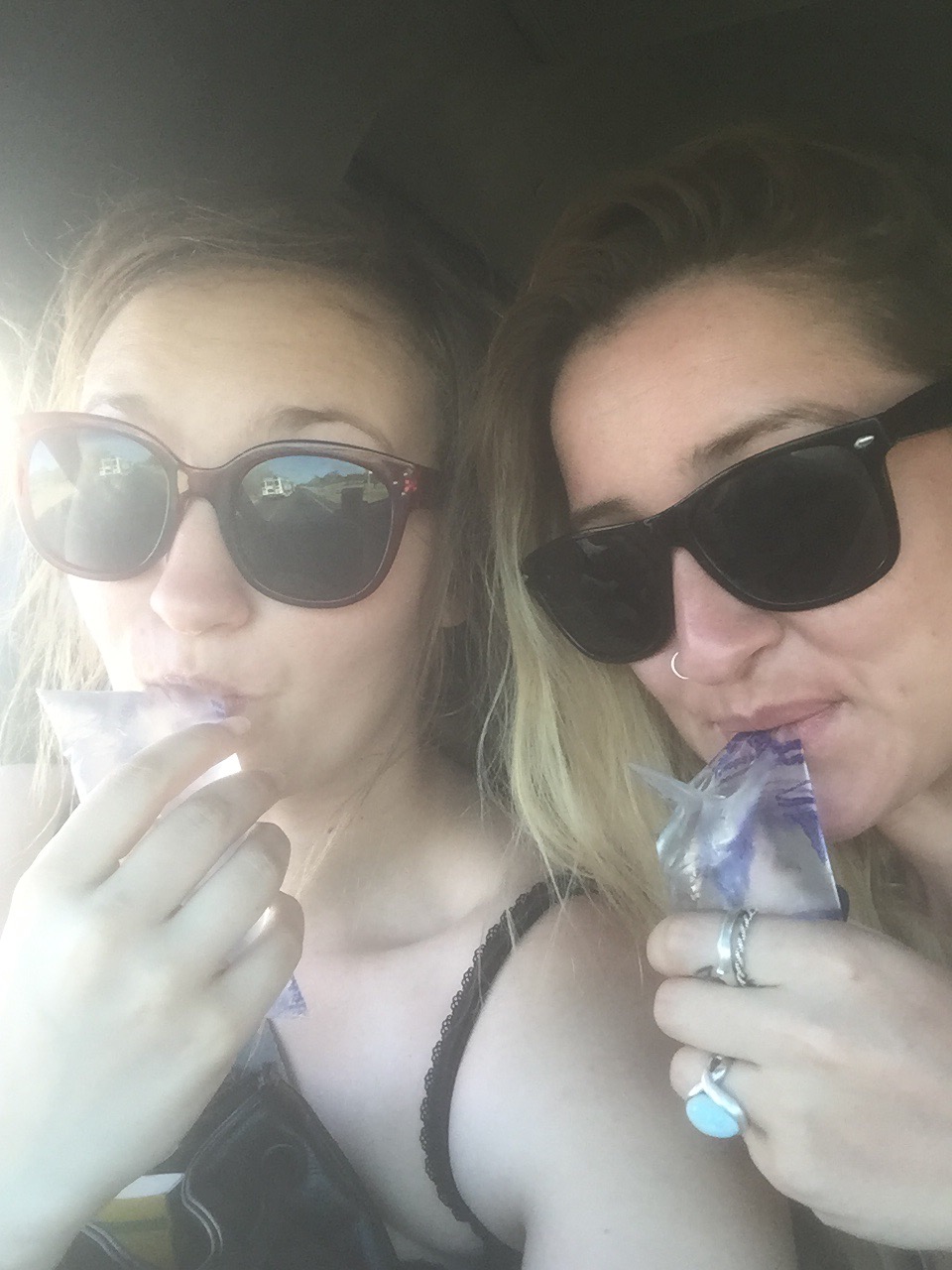 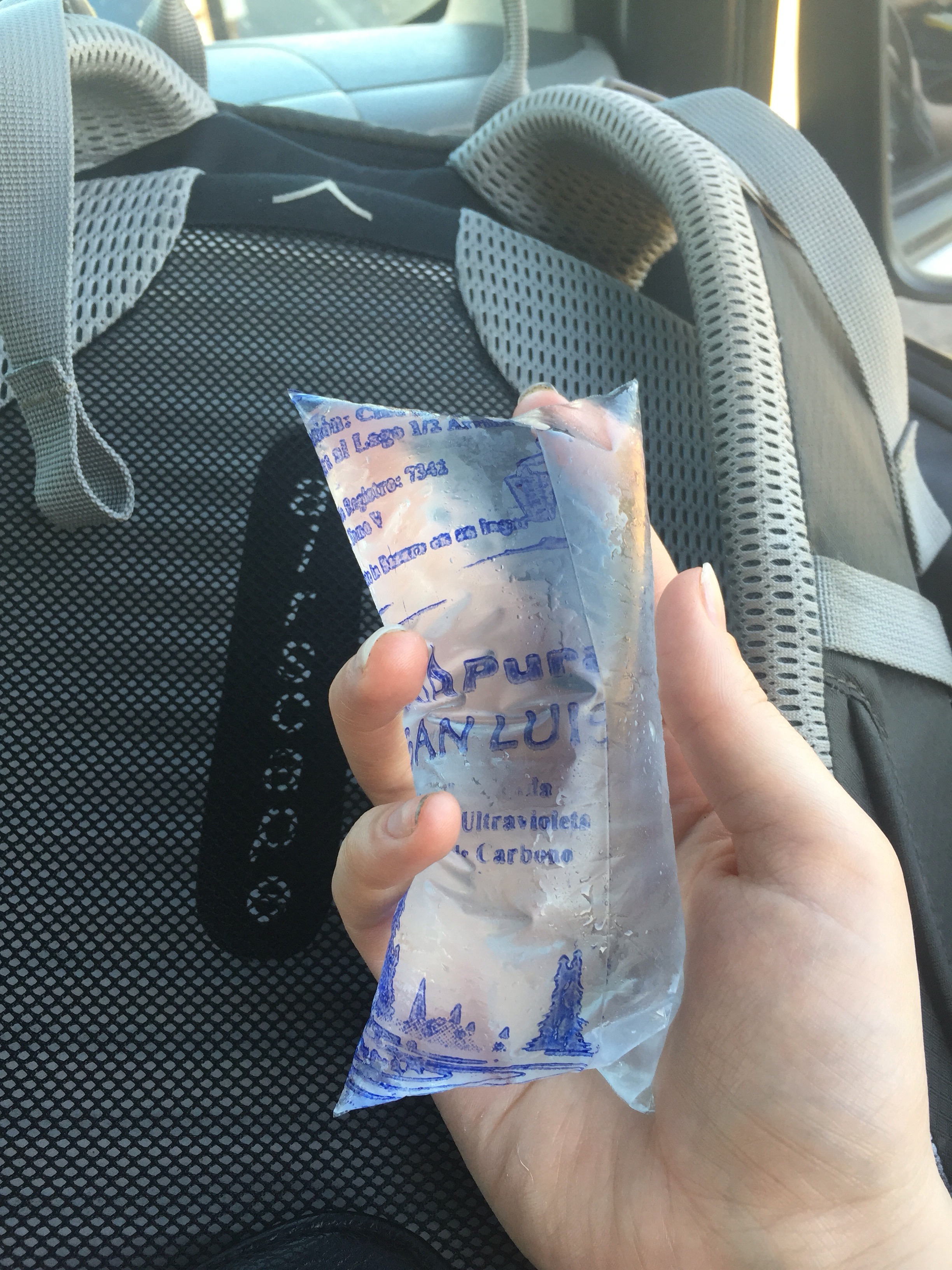 Ps. I couldn’t really find a spot to fit this in where it would flow, but I think it’s important that I share. Shortly after getting into this van and leaving the town, we drive by a house where a man is standing outside holding a chicken upside down by its feet. I guess his other chicken, who is still running free in the yard, has done something bad, because we witness this guy hit his chicken…with the other chicken. I find this both horrifying and so outrageous that it’s funny. Like, what did I just see? Who does that?!?

Anyway, from Managua we need to get a bus to a place called Rivas before getting the final bus to San Juan Del Sur. Our driver informs us that there are no busses after 5:30, and its already 6. We refuse to spend another night in Managua, so we make a quick amendment to our plan and go straight to Granada instead. It’s still sort of on the way to San Juan, but most importantly, it’s not Managua.

This one isn’t quite a chicken bus, but I don’t know what to call it. Again, we’re crammed in, and people are cycling in and out as we go along. At the back of the bus, a man hangs his body halfway out the door, keeping an eye out for additional riders. He and the driver and constantly whistling and yelling to each other to determine where to make stops. At its busiest, a seemingly normal and healthy woman standing in the aisle next to my seat gives up and shamelessly leans against me to support herself. I guess she didn’t feel like actually standing. This goes on for about 15 minutes before she finally gets off the bus. Byeeeee. We pay 25 Cordobas ($0.90) for this one.

We get to Granada an hour and half later, which I am stoked about because I was under the impression that it’d be three hours. Total travel cost for the day comes out to 118 Cordobas ($4.20). Not too shabby!

Another colourful colonial style town, Granada is much more touristy than Leon. Many locals speak English fluently which makes me both happy and sad. I was having quite a bit of fun using/learning Spanish!

We find a hostel with a private room for $25. This is more than I wanted to spend, and honestly I think we could have found cheaper, but we’re exhausted from a late night and long day of bus hopping. It’s cute, and run by a young French couple.

The plan is still to go to San Juan tomorrow, so we chill out at the hostel to get an early start in the morning. We’ll be coming back to Granada in a few days so I vow to find a cheaper place upon our return.