We have our second-last crappy meal. A baguette with an unnaturally yellow butter, and jam. Living the dream.

The bus that was supposed to pick us up at 8am comes at 8:30 and we board with all our stuff to get back to the boat. I’m a little concerned about timing, because we’re due to arrive back in Hanoi at 5pm, and have a sleeper bus to catch at 6pm to Hue (pronounced Hway). That’s a very tight window in a country where things rarely run on time. Our tour guide knows we have a bus to catch and says he’ll make sure we get back on time, but I don’t trust the dude. 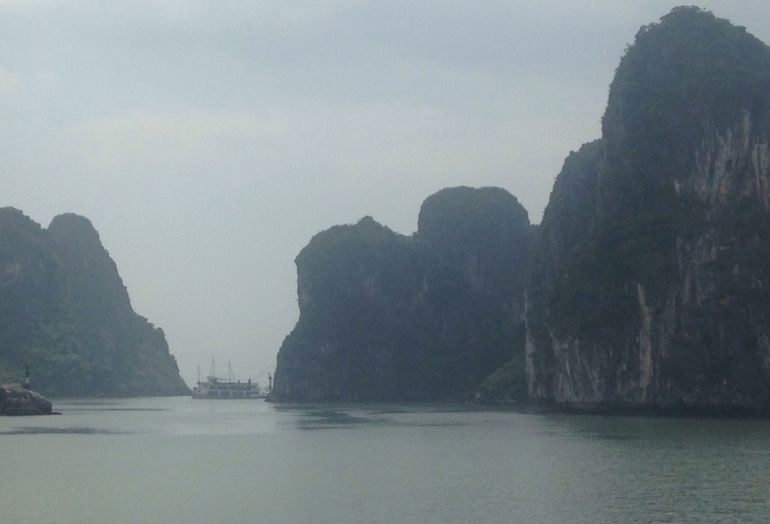 The boat drives around Ha Long Bay for an hour and a half before reaching the junk, where we wait for 20 minutes for unknown reasons, then walk down the road for lunch. Same meal different day. Mediocre seafood, luke warm tofu, chewy squid. We get to sit in the restaurant for an hour after our meal to wait for the bus. We’ve been separated by everyone we knew on our tour yet again, and no one in this group seems keen to chat. There’s supposed to be wifi, but it doesn’t work. What does one do without wifi for an hour in a boring town? I walk up and down the road looking for something, anything, of intrigue…but there’s nothing. I buy a snickers bar for 25,000 dong ($1.25).

I kid you not, we have to wait for our ridiculous tour guide to finish getting a hair cut before we can leave. He tries to pile 23 people into one van, but two elderly Vietnamese men are just not having it. I can’t blame them. The way things worked out, the only seats on the van left were the makeshift fold out aisle seats, and it’s a three and a half hour drive to Hanoi. They get into a bit of a shouting match, and our guide decides it’s best to just leave them on the side of the road. The van starts to pull away, and the last thing I see is one old man aggressively holding his middle finger up and frowning.
What just happened.
If this dude manages to keep his job after this trip I’ll be shocked. But I’ll never know.

After an hour and a half we arrive at our half way point which is another silly gift shop, but at least this one sells fruit! Tamara and I pick up some pineapple and stand around waiting for the van for another 15 minutes. They give us 25 minutes for a break from the drive, but everyone spends the majority of it just standing at the doors waiting to leave again. It’s only 3pm, but I feel pretty confident that we’ll make it to our overnight bus in time. If we arrive at 4:30 we’ll even have time to grab a sandwich or some kind of dinner for the road. The overnight bus pit stops are no better than the one we’ve just left.

We really do arrive at 4:30! I never in a million years suspected that we’d be on time. I’m not feeling too hungry and I’m obviously poor, so Tamara and I decide to settle in at a little street side bun cha restaurant and share a bowl. Bun Cha was suggested to us by the couple we went trekking with in Sapa, so we feel like we have to try it! It’s basically just some pork soup, that is served cold and comes with a side of plain noodles. We watch a couple at the table behind us, and they’ve added the noodles to the soup, so we follow suit. Chopped up garlic and slices of hot peppers are also readily available at the table for us to add if we wish. It tastes pretty good and only costs us 40,000 dong ($2).

We’ve still got an hour or more before the bus actually leaves, but we hang around the bus station anyway, just in case. I want to try and get the best seats available for the 14 hour haul ahead of us. No middle top bunks for me! I chat with a 38 year old American guy who’s quit his steady Hollywood job to come travelling for at least a year. He regrets not having done it when he was younger, and I think it’s pretty cool that he’s just taken the leap and left everything behind to go on a journey now. He doesn’t have a wife or kids or anything, ’cause obviously then it wouldn’t be cool for him to leave everything behind to galavant the globe.

Our bus finally arrives around 7pm. Tamara takes our backpacks to load under the bus while I run up to get us the best seats I can find. I find two bottom window bunks one in front of the other, score. Technically, we’ve been given seat numbers but some old guy is already in my assigned seat so I feel pretty confident that I can sleep down here and no one will care. Either my legs have gotten longer (I wish) or this sleeper bunk is shorter than the last time.
One of the bus staff members comes and asks me to move to a top bunk. I don’t really wanna, so I kindly ask her why. I explain that someone is already in my seat and that I’m comfortable where I am. She tells me that a lady with a baby is going to board the bus and will need my seat. A baby?! On a 14 hour bumpy, cramped bus? Is it too late for me to get off? This is 100% going to be the bus ride from hell, I just know it.
I don’t move to a top bunk, but we compromise and she let’s me move to a middle bottom seat just one spot over from where I was. In some ways the top would have been better, and slightly further away from the baby, but alas. At least here on the bottom bunk I don’t have to worry about rolling over in my sleep and falling 4 feet. For every other person who boards the bus and tries to sit down in that seat, they’re told they have to move.
I ask about the “free wifi” that is supposed to come on all the buses and am just given the answer, “no”. Sweet so no wifi. That was predictable and I’m not even mad about it. Unfortunate sure, but I’m essentially paying $7.50 to be on this bus right now, so who could really expect a solid wifi connection?

The bus fills up and we start to drive away; the only empty seat on the whole bus is the one that’s been saved for this mysterious baby lady. What’s her deal anyway? A staff member tosses an extra blanket and pillow in the seat, using it like a storage space.
There’s totally no lady with a baby. Why have I been lied to? I ask the driver as he passes me, if anyone is going to sit in my old window seat. He ignores me. On his way back down the aisle, I wave my hand out at him and say “hello, excuse me!” in a friendly tone. He literally pushes past my waving hand. Plows right on through, even pretending he doesn’t see it when it touches his damn leg. I am a little shocked. He’s ignoring me on purpose, and I don’t know what I’ve done to piss off all the employees so much. We make one final stop on the side of the road where someone, who’s clearly a buddy of the driver, hops on board and sits in the baby seat! What the hell mannnnnn! No one likes being lied to, but it bothers me exponentially when I’m fed blatant and unnecessary lies. Don’t pull the baby card when you just want your bro to have a good seat. The seat isn’t even that much better, and when I sat down there were still plenty of other seats to choose from. Nothing makes sense.
On the other hand, bonus that I won’t have a crying baby beside me all night!

Trying to get comfortable is an experience. The short bed doesn’t allow for much leg room, especially when I have to share the space with my backpack. There’s a little cubby hole at the end of each bunk to hold our shoes, luggage, and 30% of the length of our bodies. It’s not ideal, but in the other sleeper busses it never bothered me much. Here, I can hardly get my legs in the cubby hole. I’m not a total giant, but for the longest time I have to sit upright with my knees against my chest. Sleeping might be a challenge. 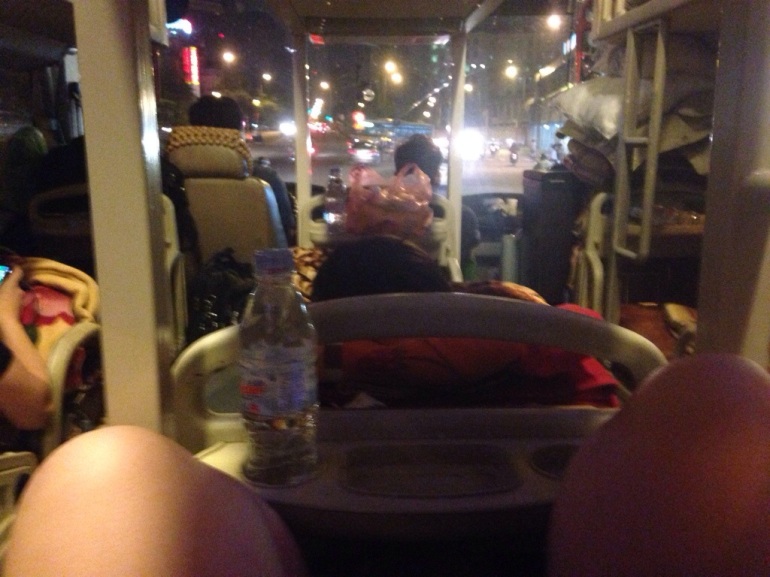 Slowly, I manage to get comfortable. That word is a stretch, but I get about as comfortable as physically possible on a bus seat designed only for 5’2 skinny Vietnamese people. It’s manageable now.
The driver comes by and gives me the wifi password on a piece of paper. Hoorah! There IS wifi! I try to be quiet about it because I know the signal will get sketchy if everyone on the bus connects, but a couple people see the interaction and ask for the password, too. I have a solid connection for a total of 5 minutes before it starts cutting in and out. Oh well, it was fun while it lasted.

An hour into the drive we make another road-side stop and pick up two more people. They’re given blankets and a pillow, and have to sleep in the aisles between seats. They’re not mad about it, and from what I gather they know the driver too…or have at least done this before.
I really don’t mind at all, but it’s a little weird when a dude gets down on the floor right beside me and tucks himself in for the 14 hour drive. I’m only about 2 inches higher off the ground than he is. It’s…cosy? I hug my bag tight to my body, plug in my headphones, and try to find sleep.

I wake up a couple hours in, to find that I’m absolutely surrounded by humans. Someone is smoking a cigarette, and I keep getting someone’s knee jabbed into in my arm. I can hardly believe how overly crowded the bus is. Except I can, because I’m in South East Asia. Buddy a seat ahead of me doesn’t have just one middle of the night cigarette, he decides to have two. If we ever made a pit stop, I’ve most definitely slept through it. I don’t know how they expect me to reach the washroom when there’s a line-up of bodies on the floor to maneuver in the dark. Luckily I’ve learned not to drink too much water on these trips. 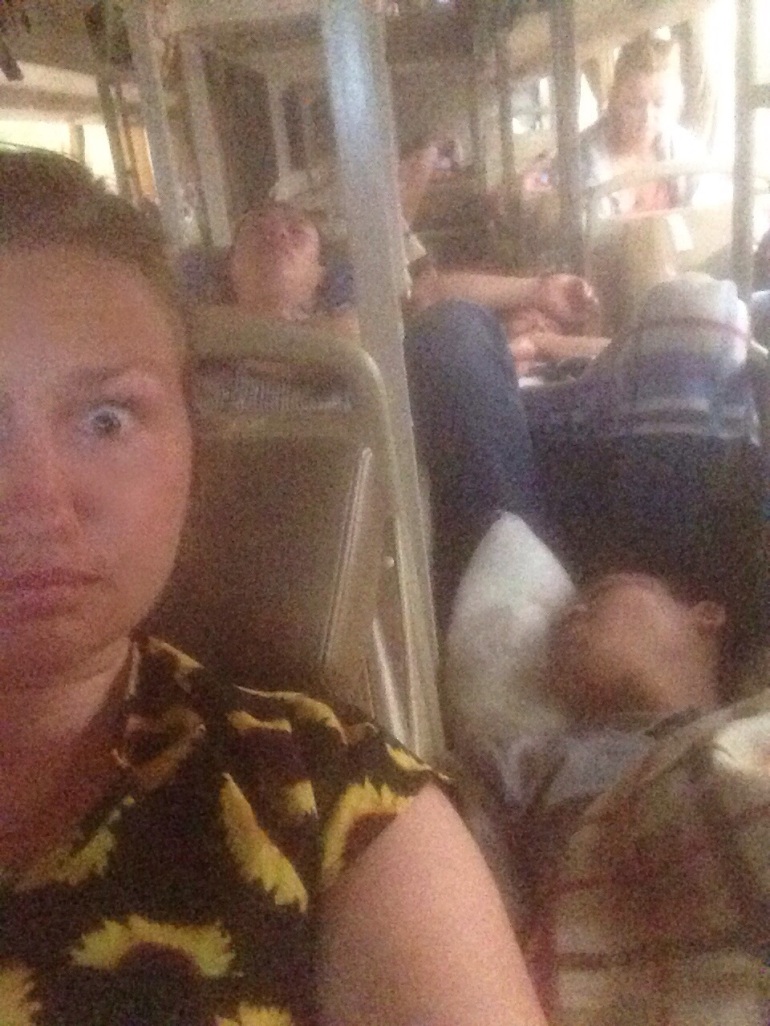