I always sleep SO well on these tatami mat futon beds. I must invest in one.
The bean bag pillows, however, I think I can do without.
I get up just in time for breakfast at 7am which is a traditional Japanese breakfast full of small dishes. It consists of a piece of cooked mackerel, miso soup, rice, a raw egg, and natdo (which is Japanese for fermented soy beans). This is a popular breakfast dish, and notoriously difficult for westerners to stomach. I’ve seen it a couple times now at breakfast buffets, but have decided that if I’m going to try it, I should do so at a good Japanese restaurant. Now is the time. Angela is across the table from me, which is great because she can coach me through it. I stick the stringy, kind of sticky looking soy beans in a bowl with my rice and mix it up. There are two mini packets of sauce that come along with it, so I tear those and pour them in too. I lift my bowl to my mouth and start using the chopsticks in a circular motion to eat the beany rice. It’s too stringy to eat in small doses, so the goal is to just keep ’em coming to avoid a mess. I get about three rounds of chopstick full bites before I have to stop. They’re not delicious. Of course, I can swallow it, there are worse foods out there, but this isn’t something I can classify as enjoyable. The next step would be to add the raw egg, but I just feel that’s unnecessary. No thanks.

We pack up and head to the vans. We’re skipping a little bit of the pilgrimage today and starting at Temple 20 (yesterday we were only at temple 12). We’ll get to do more hiking today as we walk from 20 to 21. We start our day off with a half hour descent. There are a lot of stairs built into the trail, which is a little hard on my knees. Specifically my right knee on its right side. Ouchhhh. I know this sounds crazy but picking up the pace and doing a little jog actually makes it feel better. So I get in a little trail run.

We make a quick stop in this almost empty village. There’s evidence that people still live there, but an abandoned school building with rusty fire escapes and furniture covered with tarps seems to be the biggest land mark. The gazebo where we all meet up is just a random mixture of old furniture; most notably a torn
blue pleather couch, a fabric folding chair, and three brownish-white bar stools. I assume these must be left here for the pilgrims, but I’m really not sure.

The last portion of our hike is only about 2km and is increasingly difficult as the ascent goes on. It starts out relatively flat and meanders around a river with a very gradual ascent along the way. About half way through, the stairs start. They feel pretty killer at the time, but once I reach the top (and stop sweating and wanting to throw myself off the mountain) I look back at them fondly. My knee pain is basically gone. It seems to only hurt on the downhill hikes, which this trail doesn’t have at all. Pros and cons.

By the last 300 metres of the hike, I am alone and can see the temple at the top of the hill. I reach a small fork in the paved road that gives me the option to walk along a gravel path. I figure both of them must lead to the temple, so I pick the nice trail instead of the paved road. 2 minutes later I find myself at a dead end facing a ladder against a tall cliff. Obviously I climb it. I leave my poles and backpack behind and slowly climb up the rickety ladder, feeling a little like this might be poor choice. There were some signs along the trail, but all in Japanese. Maybe they said “danger, don’t climb ladder”, I don’t know. I just feel like I have to know what’s up there!
Once I reach the top I can see a small shrine sitting at the edge of the cliff, and mountains off in the distance ALL around. It’s stunning. I feel free, I feel alive. I know it’s far from it, but it feels like the tallest place on earth. I sit there on the cliff for a few minutes before realizing that no one knows where I am. I had passed Dad a few hundred metres back on the trail, and he’ll be confused when he gets to the temple and I’m not there. I know I have to go back down. It was a fun little side adventure while it lasted! After a week of following someone else’s guided footsteps through Japan (as wonderful as it has been) it’s nice just to discover something cool on my own, even if it’s small.

I hike back to the temple quickly to meet up with all the other Trekkies. Dad didn’t even know I was gone.
I joke, he did, but he assumed I had gone up ahead to the main temple, which is up yet another two flights of tall stone steps.
This temple is beautiful, as per usual. I am fortunate to catch a glimpse of a monk walking beneath a cherry blossom tree. It’s picture perfect.

We take a cable car down the mountain, which I’m sure my knee is thankful for. We are served “mushroom tea” while we’re waiting, which is really more like a bouillon than a tea. It’s salty, but yummy as long as you think of it like a soup.

The cable car is pretty cool! There is a square grate in one section of the floor, and huge windows all over the place so we can observe the wonderful scenery on our way down the mountain. There is a cable car tour guide with a microphone, pointing to all sorts of different things out the window but speaking Japanese. Besides Angela, Ted and one random man who is not a part of Mountain Trek, no one on this cable car can understand what he is saying. But the cable car guy takes his job very seriously and does his very best to get us to understand what he’s communicating anyway. He even warns us whenever there will be a bit of turbulence.
Ted brings Dad his hiking poles, which he had totally forgotten outside before getting on the cable car. GoPro attached to them and everything. I laugh at him hysterically.
When we get off the cable car, I’m almost inside the restaurant for lunch when I realize…I’ve forgotten MY hiking poles on the cable car. Thankfully, Kirkland picked them up for me. What a gem! I guess I can’t laugh at Dad anymore.

Lunch is at a restaurant and souvenir shop at the base of the mountain. Ted has pre-ordered all our meals, and does a fantastic job by choosing a delicious bowl of udon noodle soup with wild vegetables picked from the mountain. It totally hits the spot.

Now we’ve got a two and a half hour drive ahead of us to our next accommodation. It’s a scenic route which keeps the long drive interesting.

Ted has this weird habit of doing the opposite of everything he says, so whenever he tells us a hike is going to be long and hard, I assume that means short and easy. When he says the food gets better, I expect 7/11 lunches. It’s always a gamble.
Today, as we arrive at our new accommodation, he wants to take us on a 20 minute walk to a “special place”. I assume this means an hour walk to a place that sucks. I’m fine with it, but I’ve just learned not to get my hopes up too high.

We take a 10 minute walk down to a bridge that is UNREAL and made of old vines and wooden planks. It’s stunning! The gaps between each plank are about as thick as the planks themselves. You don’t want to drop anything!
It’s beautiful AND it realllllly is only 20 minutes away. Ted was right!!! I love it. We take our time crossing the swinging bridge and getting shots of the beautiful glacial (I think) water below us. A couple people have a fear of heights, but face their fears to cross the bridge. That’s bravery at it’s finest if you ask me! If you’re going to cross a bridge, this is probably the scariest one on which to do so. 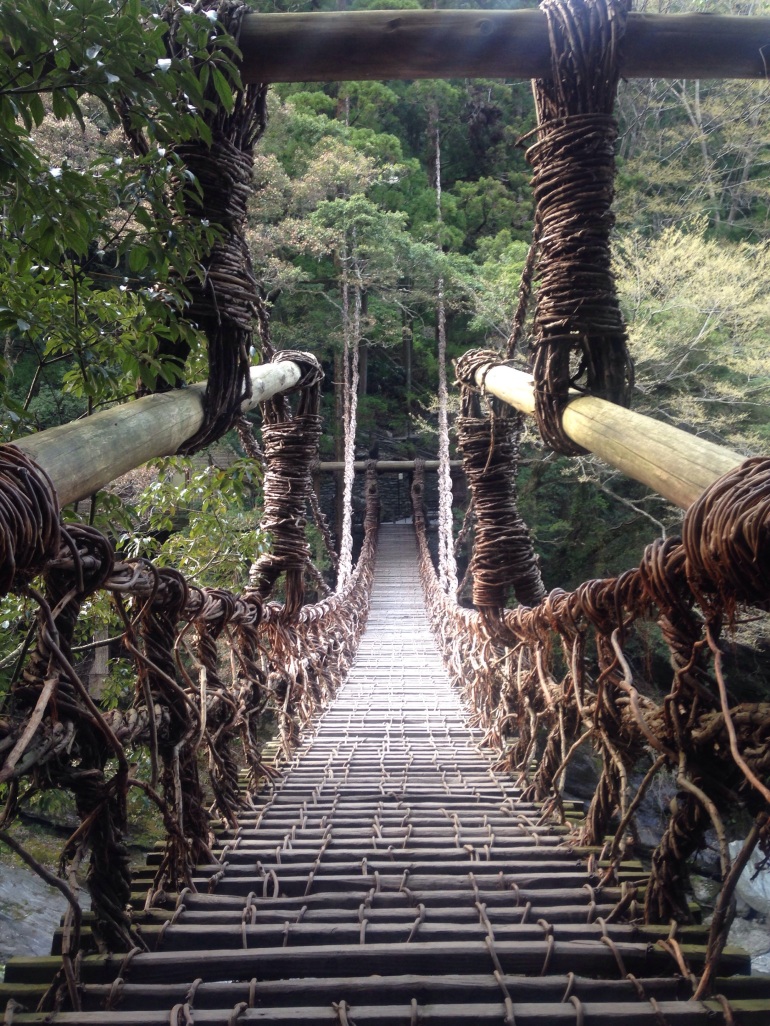 Dad, Angela, Kirk and I also run down to a waterfall just a few hundred metres away from the bridge. It’s stunning and I want to jump in, but the bus is waiting for us…and it’s like 15 degrees. 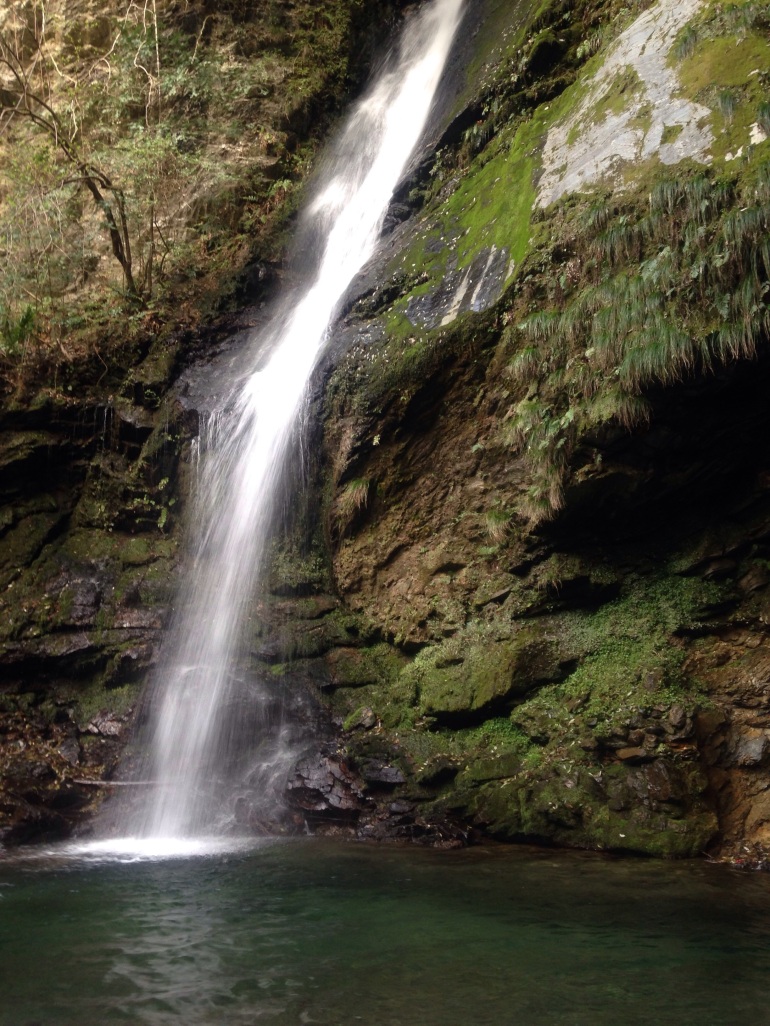 I take a quick onsen before dinner. It’s the most fabulous one yet. Actually, the whole hotel is fabulous! It’s a great experience. I believe we’re in an area of Japan that not too many foreigners get to see. I LOVE places like this. Little hidden gems. We’re staying at what appears to be the fanciest hotel in town. The staff leave us a cute origami flower and a note welcoming us to our room.
I love it here!

Dinner is served in traditional Japanese style. The food is unbelievably tasty and very local. We eat river fish (which I expect is literally caught outside in the very river we were just standing over on the bridge), kobe beef, soba noodle soup, tempura, and a ton more. Everything is perfect.

I go back to the outdoor onsen at 9ish to catch a glimpse of the moon on a calm night. It’s the most wonderful end to a wonderful day.