I wake up at 1:30am. This is not good. I don’t usually struggle so much with jet lag, but today it’s getting the best of me. I can’t get back to sleep so I waste time taking an awesome shower in our awesome bathroom. I would basically just like to duplicate this entire restroom in my permanent home. Though, I think I can do without all the bidet buttons and stuff for the toilet. That ain’t me. Bring on the heated seat, though.

Breakfast isn’t served until 7am in the hotel and we skipped dinner so we’re both starving, but there’s no room service or anything. We just chill out, try to set up the GoPro, and make tea. A very eventful start to the day. I know I’ll get hit with a wave of fatigue at like 6pm tonight. What a treat that’ll be.

Breakfast is…interesting. Partially this is my fault. When will I learn that a breakfast sausage in Asia is NEVER a breakfast sausage. It is ALWAYS a hotdog. No exceptions. In my defence, these ones were well disguised. Breakfast is offered as a buffet, with lots of vegetables, rice, salads featuring hidden fish (baby sardines, anyone?) and some western choices. Bacon, sausage, scrambled eggs, croissants etc., are featured on the buffet; so aside from trying a medley of inappropriate “breakfast” salads and some rice, I lamely choose to stick with the usual western morning options. The breakfast sausage even LOOKS like breakfast sausage. But surprise! Hotdog.

Immediately after our meal, Dad and I check out of the hotel and get a taxi over to Tokyo Station where we can catch a “super express” train to Kyoto. They aren’t kidding around with the “super express” part of things, the train travels close to 300km/hr. It’s a beautiful and clear day, so we catch a glimpse of Mount Fuji off in the distance shortly after leaving Tokyo.

Cherry blossom trees have started blooming and are sprinkled all over Japan from downtown Tokyo to the backyards of those who live in the countryside. Imagine waking up to a beautiful pink tree outside your window! So cool.

When we arrive in Kyoto we meet up with a friend of Dad’s named Angela, who is originally from the States but has lived in Japan for almost 20 years now. She takes us to a little Family- Mart (basically the same thing as a 7/11) and we buy some onigiri (little triangular rice snacks wrapped in seaweed) for a picnic lunch. Then we hop on another subway-style train which takes us to Nara. Angela tells me this is where to do the best second-hand kimono shopping! I originally thought I would buy a new one, similar to how I bought a new sari in India, but I learned that a new kimono costs around $2,500.. soooo unless I plan on coming home in a week, I’ll have to go second hand. I very much look forward to learning about all the ins and outs of kimono wrapping. I’ve heard that it’s more difficult than it looks!

We get a taxi from the train stop in Nara and go all the way up to Kasuga Taisha; a shrine absolutely covered in old stone lanterns sitting amongst a thick forest of moss covered trees. We take our time walking through the stoney pathways, and stop to admire the architecture and beauty of the shrine tucked away in a forest.

Wild deer roam around the grounds of the shrine and, actually, ALL over Nara. You can pet them and buy little cracker-like treats for them to snack on. There are warning signs around to let you know that sometimes they get aggressive and attack you, just a little heads up. Feed the deer, but they might attack you.
Obviously I bought the crackers and fed them to some eager deer. SO eager in fact, that when I didn’t break off a piece of cracker fast enough, it opted to bite my boob instead. Right in the left boob. Ouch!!! I have yet to check for damages. They don’t mess around, these deer. They are serious about their crackers. I shriek, give the deer a dirty look, and feed his friend some crackers instead. I totally got the last laugh on that one.

At the end of the shrine’s exit trail we see a woman selling steamed sweet potatoes from a small cart. The sign says 200 Yen ($2) and I love street food so we ask for 2 sweet potatoes. Here’s the thing… The sweet potatoes are the size of my foot and it’s actually 200 Yen per 100 grams. Guess how much we pay for two sweet potatoes? Does 2,000 Yen seem like too much? $20 for two fucking hot potatoes? We’ve made a huge mistake. I don’t know if it’s like, rude to return a potato? We don’t try. We accept our starchy fate and I thank The Lord that we didn’t each order our own sweet potato. I eat about 1/4 of it. It’s remains are currently in my backpack and I don’t know what one does with 3/4 of a (now cold) steamed potato. When it’s $10 you don’t just throw it out. I paid some serious coin for this potato.

We walk down (potato in backpack) to the Todai-Ji Temple where a beautiful old building houses a giant Buddha statue. We are slowly making our way back towards the train station, and only make a couple quick stops along the way to see a couple ancient pagodas, and to do some quick kimono thrift shoppin’. Angela leads me to a little vintage boutique shop that carries previously loved designer handbags, jewellery, and obviously, kimonos. Dad and Angela continue to walk along the strip of shops and leave me to try on about 10 of the kimonos I fell in love with upon entering the shop. All the beautiful fabrics and colours are irresistible! I choose a pinky-orange silk kimono with a subtle texture, and debate getting an obi (the part that wraps around your waist and ties up in the back) but I decide to leave that part for later because none of the patterns really appeal to me. I also don’t think I’ll ever be in a situation where a proper kimono is needed. I can more likely see myself using it as lounge wear around my house. I pay 3125 yen ($31) for a silk kimono. Total score.

Now, feeling the wave of fatigue wash over me, my feet are starting to throb and my eyes becoming a nuisance to keep open. We still have to make it back to Kyoto by train and find our hotel. I can only hope that it will be easier than last night.
We hop in a cab and Dad pronounces the hotel name to the best of his abilities. Somehow it works and our driver gets us to our destination.

Our room at the Hean No Mori Hotel is the coolest place so far. It’s an old style Japanese room with lots of space, a tea/tv room (complete with kneeling tea table) aaaaand another fancy heated toilet seat. When is this technology coming to Canada?!?

We make the mistake of eating the hotel restaurants buffet dinner. Never again. No more buffets in Japan.
We finish our lame meal and go back upstairs to the room. It’s 8:30pm and I can’t keep my eyes open any longer. Hopefully I don’t wake up at 1:30am again. 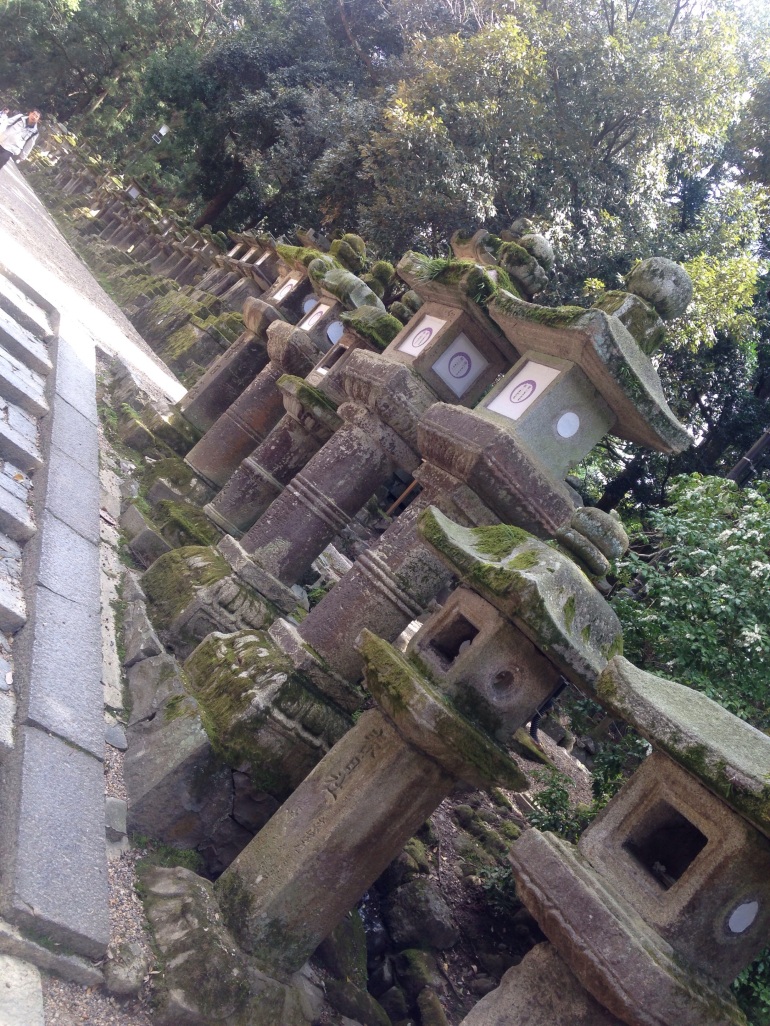 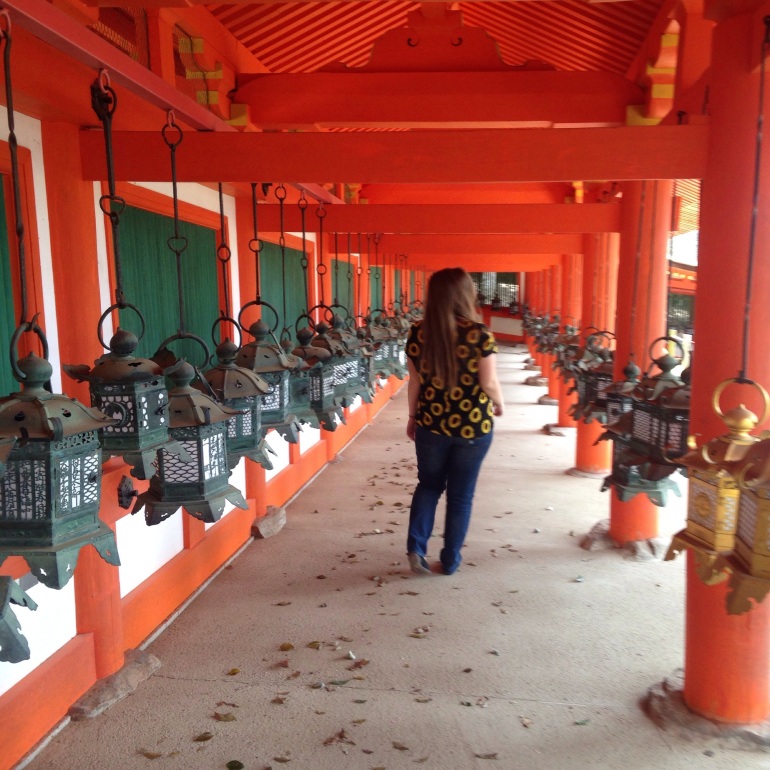 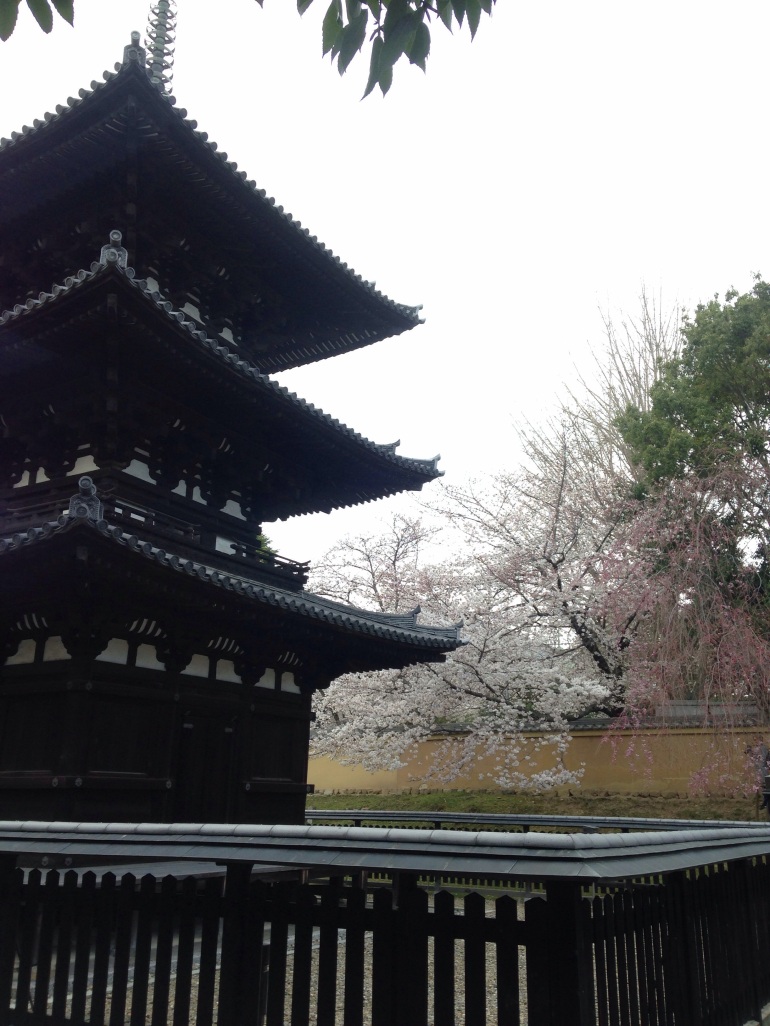 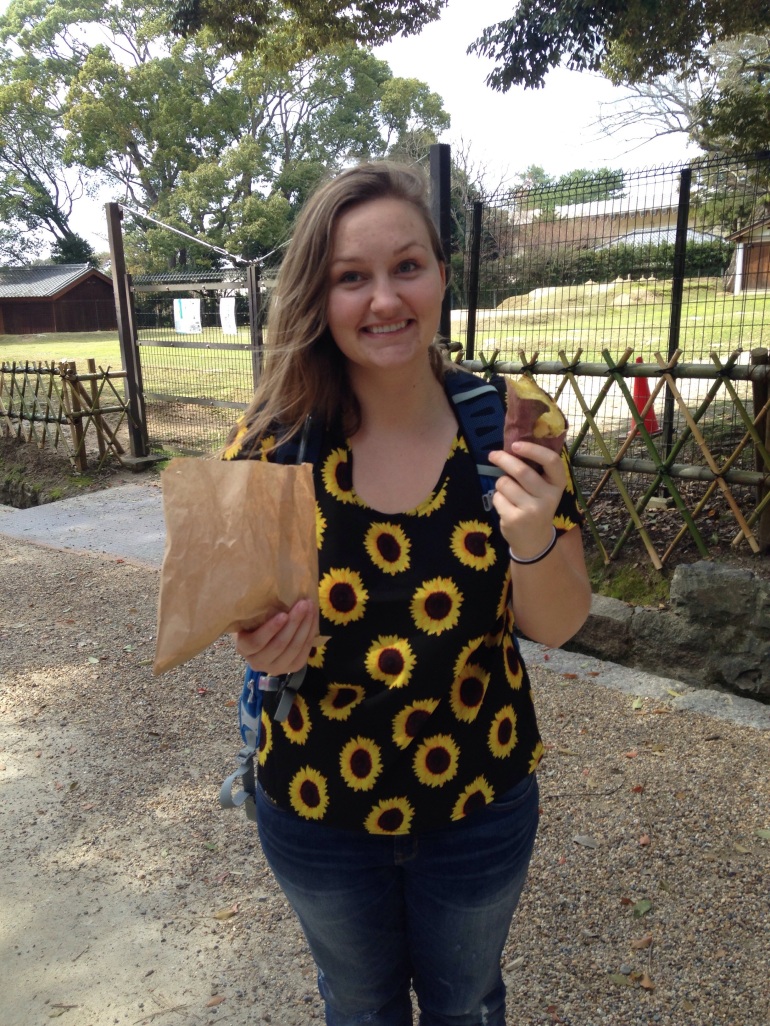